A BRIEF HISTORY ON THE TURKEY CAPITAL OF THE WORLD

Like many small Texas towns, Cuero has a rich history in agricultural industry. And just like much of those communities, Cuero chose to celebrate the farming product that made them famous: the turkey.

Starting in the early 1900s, area ranchers organized their small family turkey raising operations on the surrounding prairies into a regional force. In 1908 the first turkey processing plant opened on the edge of town near the rail road line where farmers could deliver their flocks, sell them at a fair market price, have them processed and packaged, put on rail cars, and shipped to anywhere in America.

Keep in mind that during this era the automobile was a rare sight. In order for a farmer to get his turkey flock to town he had to herd them on foot, much like a cattle drive, since large, fowl-carrying trucks were not yet invented. Many farms were located far outside of town, requiring much diligence and patience to get these birds across fields, roads and river.

Once in town, thousands of turkeys strutted down the streets on the way to their final destination. You can imagine the spectacle that 10,000 turkeys would cause. Visitors came from far and wide to witness this annual November turkey drive, and the smart Cuero merchant would capitalize on this by opening up rooms for board and hot meals to enjoy.

It wasn't long before local business leaders got smart. Legend has it that visiting entrepreneurs commented that "You guys should really do something with this," meaning celebrate what has made your town famous and recognize this new annual tourism boom.

On November 25-27, 1912, Cuero hosted its first Turkey Trot. Estimates told of 30,000 people flocking to town to see over 18,000 turkeys herded down Main Street. Corn was scattered on the street in an effort to keep the birds moving. In addition to the fowl, visitors were treated to agriculture shows, a carnival, big band dances, a football game, floats festooned with turkey feathers, a visit from Governor Oscar Colquitt, and the crowning of the first Turkey Trot royalty, Turkey Queen Minnie Lee Mangham.

There were 14 Turkey Trots held every so often between then and 1972, each being bigger than the previous. Besides the bird of attraction, the festival took on a Turkish (note the name of the country: Turkey) theme with a pageant dedicated to exotic lands of the Middle East. A king and queen, Sultan Yekrut (turkey spelled backwards) and Sultana Oreuc (Cuero spelled backwards) were crowned and reigned over the fest and rode in the Turkey Trot Parade with costumed notables and children as their escorts.

With the turkey industry slowly moving out of town and turkeys themselves unable to march in the parades anymore, the Turkey Trot bowed out in 1972. Wanting to keep a local theme and festival going however, a committee was formed with the idea of having a yearly festival to promote the town's heritage. So in 1973, the annual Turkeyfest was hatched.

Enter Worthington, Minnesota. Like Cuero, they also had a rich history in the turkey farming business and a festival, King Turkey Day, dating back to 1938. Their festival celebrated the turkey and paraded them down their main street as the main attraction as well. And also the honor of being the so-called Turkey Capitol. So what are two turkey capitols to do?

Have a turkey race.

The editors of both town's local newspapers got together and decided that a simple turkey race would be held in order to decide who would be the turkey capitol. The first heat would be held in Worthington at King Turkey Day in September, and the second would be at Turkeyfest a few weeks later. The bird with the fastest combined times would win the race, the title, and the "Traveling Turkey Trophy of Tumultuous Triumph." To the loser, the "Circulating Consolation Cup of Consummate Commiseration."

They had so much fun that they did it again the next year. And here, all these decades later, Paycheck and Ruby Begonia are still going at it in their annual battle of the Great Gobbler Gallop to decide which town's turkey is the fastest, and which can claim to be the "Turkey Capitol of the World" for the next year.

And in the process, Turkeyfest has grown to be an annual homecoming and celebration of what has made the city of Cuero great. In addition to the parade, carnival, food, arts and crafts, games, shows, barbecue cook-off, big live dances, and turkeys, Turkeyfest has become not only an annual attraction, but a place where families can gather for safe and fun entertainment and visiting.

The Cuero Turkeyfest Association is comprised of citizens that share a common mission to give back to the community through directing this annual affair. All board members are unpaid volunteers that work countless hours to make sure that the Cuero Turkeyfest is planned, set up, orchestrated, and put away again each year, on time. If you happen to see one of them running around the festival grounds, and they have time to stop, be sure and give them a big high-five. 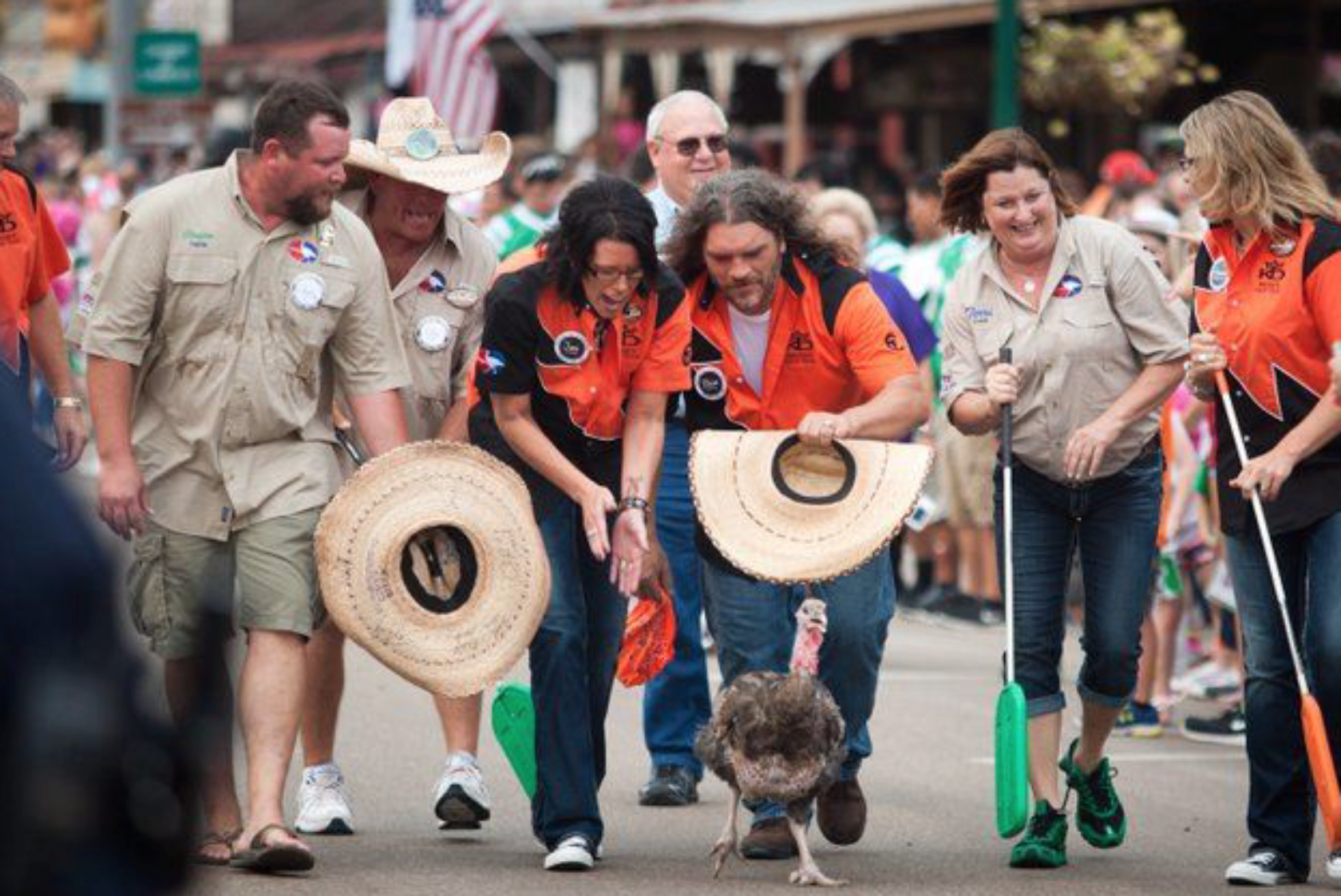